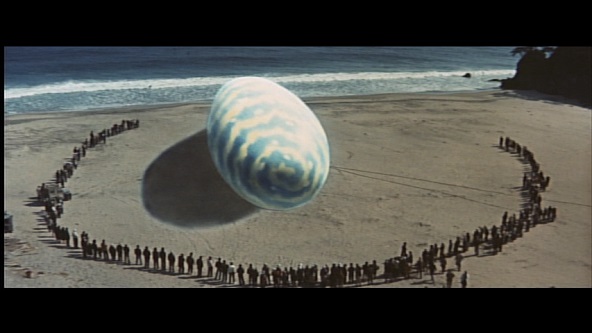 *. The billing for this clash of the titans is surprising. Mothra’s name comes first? Understandable for a movie like King Kong vs. Godzilla, but who is Mothra to be taking top spot from the King of the Monsters?
*. Actually, Mothra was not an unknown quantity. She had already starred in her own feature, the 1961 movie Mothra, and would go on to appear in more than a dozen other films. But I don’t think she was ever as big in America as she was in Japan.
*. Indeed, when American International released the Americanized version of this movie it was titled Godzilla vs. the Thing. Not only has Godzilla regained top billing, but Mothra is left unnamed. This was reportedly done to generate curiosity as to who Godzilla’s foe would be. I think it might have been just as much because AIP realized how stupid a giant moth sounded, and how Mothra likely wouldn’t sell tickets. Mothra was also kept off the movie’s posters, perhaps for the same reason.

*. Even as a child I was never very fond of Mothra. Despite the fact that she’s the good monster in this battle of the beasts, I was always cheering for Godzilla. Especially when he was up against the pair of silk-spewing maggots that hatch from Mothra’s egg. I found their appearance disgusting, and their fighting technique low.
*. I also listened to a lot of heavy metal when I was a kid. On the album Metal on Metal by the band Anvil (1982) there was a song called “Mothra” that I can still sing along to. Anvil’s Mothra, however, is a less benevolent figure. Here’s a taste of the lyrics:

Comin’ to get you! You can’t escape
You’re gonna die, you wonder why?
Mighty wings beat out thunderous gusts of wind
Megatron eyes explode in the skies, it begins!
Talons like razors are shredding your bones to pieces
Is this a dream or is God telling you it’s over?
Mothra, Mothra, Mothra
Buildings are falling, black death is above you
You can’t run there’s nowhere to go
Rubble and stone block your path
You can’t escape from its wrath.

Great stuff. I’ve never forgotten the line “You’re still alive but your luck is running out!” Metal never dies.
*. On the commentary track by Steve Ryfle and Ed Godziszewski they begin by calling Mothra vs. Godzilla their personal favourite Godzilla film, saying that “there’s no doubt that the original Godzilla might be the best film but in many respects this film represents the high point in technique for many of the key players.” In his book on Godzilla, Japan’s Favorite Mon-star, Ryfle also says it stands “indisputably as the greatest of all the Godzilla sequels.” Which is both good and bad given how early it was and how many more of these movies were to come. Then again, my vote for the best Bond movie would be either From Russia With Love or Goldfinger, and they were the second and third entries in that franchise.

*. Mothra vs. Godzilla doesn’t do a lot that’s different than the earlier Godzilla movies (the tiny people being the main thing that’s new), but it does the same sort of things better. As you would expect given the amount of practice they’d been getting at Toho. There’s a new Godzilla suit for one thing, that made it easier for Haruo Nakajima to move around. The giant Mothra model was also an impressive technical achievement. Godziszewski even says that “perhaps no other Toho monster has been as realistically brought to life,” which is high praise. The miniatures are well done, the process shots mostly effective, and the editing in the action scenes first rate. As a kid I ate it up.
*. This is important because Toho was consciously going after kids now. Infant Island might even be a metaphor for television. Meanwhile, the broad comedy of King Kong vs. Godzilla is toned down quite a bit. There’s some funny stuff here but it isn’t comic in quite the same way. Instead we get the start of a drift into that peculiar loopiness that is so typical of a certain strain of Japanese cinema that was just taking off at the time and which would go on to get far weirder.

*. The clearest example of this comes with the twin faeries or small beauties. They’re played by a pop duo known as The Peanuts and their appearance here really signals the transformation of Godzilla into a franchise with its own unique mythology. In earlier movies the premise at least made a kind of surface sense. Godzilla and his ilk were dinosaurs awakened or released through nuclear testing, or perhaps inhabitants of a remote island. But who are the small beauties? There’s no plausible explanation for their existence, much less their telepathic powers and ability to magically disappear and then reappear in different places.
*. Part of the back story is actually kind of interesting. I like the huckster Kumayama and the corporate heel Torahata. They make a great villainous odd couple and I was hoping something more might have come of them. The amusement park theme was also kind of meta, since Mothra and Godzilla are both carnival attractions themselves. But unfortunately the two stooges are erased well before the end, and we end up with the usual monster mash. The army tries to stop Godzilla but, as always, comes up short. Then the slugs do their thing, which is at least something different if not that satisfying.
*. This is a nutty movie, but it is well done and it’s a lot of fun. It was never my favourite Godzilla movie as a kid, but I appreciate it more today. Alas, if this was the best Godzilla sequel ever that also means it marks a tipping point. And there was still a long way to go. 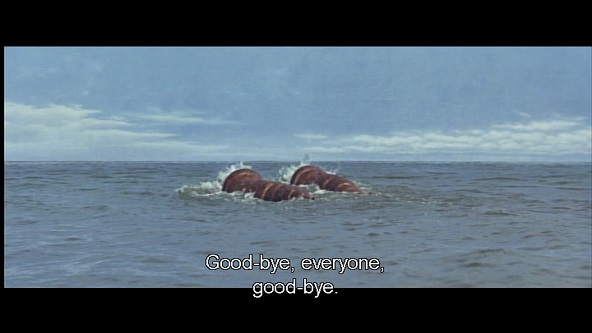